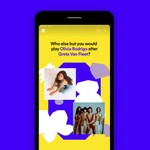 In the app’s new Only You hub, users will receive information about their recent personalized audio pairings (such as playing Olivia Rodrigo followed by Greta Van Fleet), how their listening varies by time of day, and even an “Audio Birth Chart” showcasing artists that connect with the user’s personality in different ways. There’s also a “Dream Dinner Party” in-app experience, where users select three artists they’d invite to a dinner party, then receive a personalized Spotify Mix for each artist.

Only You also points out the listening habits of entire fandoms. For example, Spotify found that Doja Cat‘s Spotify fanbase has cumulatively listened to more than 4 million hours of — yes — whale sounds, while Rosalía fans have created 36,000 playlists with the nails emoji in the title.

Finally, Spotify is adding a new personalized feature currently in beta called “Blend,” allowing two friends to merge their musical tastes into one playlist, which is updated daily with picks curated just for them. To try the feature, which is available for both Free and Premium accounts, users tap “Create Blend” in the Made For You hub and select a friend to invite. Blend is mobile-only and available globally on both iOS and Android.

Only You is Spotify’s latest data-driven campaign, following not just Wrapped but also its Fan Study of insights for artists and their teams released last month, and a Loud & Clear mini-site launched in March to increase transparency around how the service pays rightsholders.

Learn more about Only You in Spotify’s blog post announcement here.