Four years later, Becerra officially kicked off her music career with the release of her debut EP 222. “That was when I knew that I wanted to make music 100 percent and live off of it,” she adds. “I’ve always liked the arts. This was my refuge.”

Becerra, who’s inspired by pop and R&B powerhouses such as Rihanna, Ariana Grande, Mariah Carey, Celine Dion, and Whitney Houston, credits Argentine rappers FMK and Big One for being the first artists to believe in her and give her an opportunity in the music scene. Since then, she’s collaborated with top-notch names including Lyanno, Rauw Alejandro, Tini, Cazzu, and Khea.

“We’re all dedicated to the same thing. I think it’s important to demonstrate that there’s unity and not competition,” she says. “It’s beautiful to see how the minds of other artists work.”

Most recently, Becerra — who signed to indie record label 300 Entertainment in 2020 — landed the biggest collab of her two-year career, joining Balvin on “Que Mas Pues?”

The song is a melodious reggaetón gem surrounded with catchy hooks left and right, where the two artists go back and forth on a relationship that didn’t work out, and will never work out. The energy of their harmonies stands out on the track, Balvin with his distinct voice and Becerra with her dulcet tones.

“He reached out to me with the track, saying that he created the song with me in mind,” she recalls. “We communicated virtually and met for the first time when we filmed the music video in New York.” 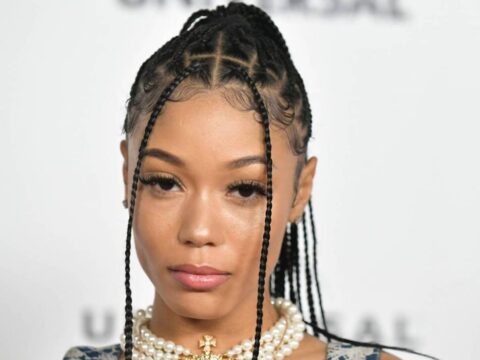