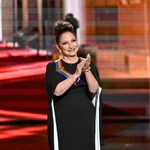 Because the Kennedy Center Honors were slow to embrace popular music forms, and because they also honor non-music performers, they are terribly backlogged in their music honors.

The 43rd annual Kennedy Center Honors broadcast is set to air on Sunday, nearly six months later than usual — the delay due, of course, to the COVID-19 pandemic. Garth Brooks, Joan Baez, violinist Midori, Dick Van Dyke and Debbie Allen are this year’s honorees. Gloria Estefan, who received the honor in 2017, is hosting for the second time.

The Kennedy Center Honors are highly competitive because they cover all aspects of arts and entertainment – not just music. When the awards program originated in 1978, the focus in its music selections was on classical, opera, jazz and traditional pop. The Honors slowly came to also acknowledge more popular forms of music. In 1991, Roy Acuff became the first country honoree. In 1994, Aretha Franklin became the first R&B honoree. In 1997, in the program’s 20th year, Bob Dylan became the first rock honoree.